Down for the Holidays 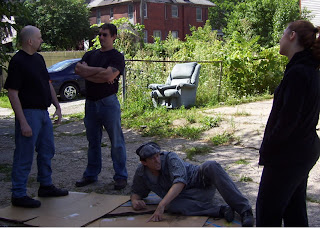 So, the holiday season has already started difficult for us.
A few days before Thanksgiving, we lost our dear friend Nick Nettles. He was running on a treadmill, at the gym with his wife, when he had a sudden heart attack and died. He was 37, and seemingly extremely healthy. We were all quite shocked and devastated. Were? Are.
I am the worst nurturer and I feel horrible that I haven't been able to do more for his wife and mother, but they have AMAZING friends and I know they are helping them as best as they can.
Jeff's former bandmate has a four year old daughter that is now paralyzed because of a car accident.
Another friend of ours was held up at gunpoint as she was carrying her Thanksgiving groceries into her home. The gunman tied her up with jumper cables and duct tap, all the while apologizing to her and telling her his life story. After stealing everything but her beer and turkey, he leaves...She tries to get herself untied and the gunman returns. She screams at him to just leave and he apologizes again and asks him to help her load up HER car with HER stuff cause he can't carry it all. She helps him, handing over her car keys and he leaves.
I don't care what your situation is, no amount of apology can make doing something like that okay!
Another friend's wife just asked him for a divorce and he is very much upset about this, especially losing the step daughters he was just getting used to having in his life.

All of this ugliness has made us fairly sad and edgy. But Jeff and I know we have each other. We are trying hard to spend our cash as well as our time wisely this holiday. Family is so important. And friends are family too.

We've also been blessed with some successes with our careers. But it doesn't seem worth bragging about right now.

Right now, I just want everyone to know how much I love them and should they need me, I will MAKE time for them! In this life, time is rarely our own. But there are situations where you just need to say "I need to get my priorities straight and love is more important than a paycheck."

Tell everyone you love how much you love them...as often as they will tolerate hearing it!
Posted by Jacquie at 4:51 PM No comments: