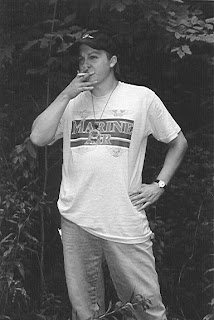 So, I don't really ask for much out of my relationships.
In fact, I am not a demanding friend or wife.
But I do have an irrational fear of cigarettes. They make me very sad AND they gross me out.

My husband, though he won't admit it, is addicted to them in social settings. If everyone else is doing it, he has to, too. He just has to be "cool" or something lame like that.

I cry just thinking about him smoking.

I told him, what I don't know won't hurt me, but if I find out I WILL hurt you.

Its a fair deal. I know he hangs out with certain people when I am not around (sometimes I am specifically not invited just because he fully intends to smoke at certain events). I am not stupid, but my marriage is worth more to me than my fears and disgust. So, I am learning to let that go.

But it really hurts my feelings when I am at an event with him and everyone is smoking and he pesters me to let him have "just one." That puts me in an awkward position. I have to put my foot down in front of other people.

I compromised my values for him in Texas, because I knew I wasn't going to win anyway. I was the only "loser" who didn't like smoking in that whole crowd. It was either put up with it, or find another way back to Michigan.

I have very strong feelings about smoking. I cannot put a finger on why it saddens me so. But it REALLY freaks me out.

I just don't think its nice or fair that I get treated like I am a psycho or a horrible person for not wanting to be around/kiss someone who has been/is smoking.

He claims he isn't addicted and that he can quit whenever he wants to, he just doesn't want to. That alone is a slap in the face. "I know it hurts you terribly, but I don't fucking care. You're a retard for having these feelings and I choose to ignore them for my own instant gratification."

This is the only sticking point I have with him really. The politics things are easily ignored. I just don't have passion about enough things to have fights about them. This I do feel passionately about. And yet I am made to feel like I am ruining his life for it.

It embarrasses me and hurts my feelings that every time we get around other smokers he begs me to let him have one. But I can't stop being me. I won't stop being me. We all know smoking is unhealthy and kills more than just the people who actually smoke the cigarettes. So, why am I the idiot?
Posted by Jacquie at 8:10 PM