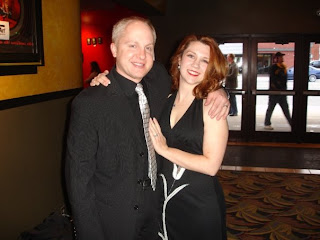 So, I doubt I will ever pay money to attend a "networking" event again. Especially one that promises a crapload of "freebies" that they ran out of in the first hour. We spent $15 apiece to get in, and had to pay for our drinks and tip the valet. Yet, we met probably one or two new people (because it was so dark and loud in there) and got a free plate of mushroom tortellini and one free "signature" drink out of the deal.

From now on, I am just going to throw parties at my house, charge people to get in AND to drink and call it a networking event.

I LOVED hanging with friends I hadn't seen in a while. And having a reason to get dressed up was neat. But we didn't get half the things that were promised with our admission price.

The price of admission is only $15.00 per person to enjoy the following:

A complimentary arrival photograph on the red-roped carpet under the search lights at Stage 3. got our pics taken, but not given a copy...doubt they plan to "search us out" to give it.

Complimentary Henry Fox Wineries wine bar. Only pinot noir at the complimentary bar. If you wanted any other kind of wine, $8-$12

Complimentary hors d'oeuvres served butler style by Chen Chow Brasserie. It was next to impossible for me to catch those folks...I honestly felt they were ignoring me...big girls need to eat, too! Screw you for judging me.

Late-night pizza by Juliano’s.
never saw that, but we left at 10:45pm...I thought the event was only supposed to go til 11pm anyway...

A guided tour of all 3 floors of Stage 3 studios Never got that...never saw where they started!

Photo op with the screenwriter and star Gordon Michaels of the recently released feature film “Unbeatable Harold” and his original 1959 Pink Cadillac Coupe Deville convertible “Jackpot” that appears in the film. View the film’s trailer at www.UnbeatableHarold.com. This film is currently enjoying its national release in theaters that started on June 12, 2009. He snubbed my friend Paul and I think Paul knew him!

Displays of the latest movie-making technology. I saw a warehouse full of Fernels (is that how its spelled?) and a display of makeup with a skinny girl in body paint and a paint shop display (run by a former student of my father-in-law) and the Uptown Palladium.

Guest appearance of Movie Show Plus TV host Greg Russell (http://vimeo.com/4260181) Talked to Greg for a long time, but I was in a movie with him. So its not like he hasn't made a "guest appearance" in my life before ;)

20 Displays of production and talent vendor services. Wait was that the paint display and body paint girl? Now I am confused.

Lamborghini display. Did not see that.

Precision parachute landing of daredevil and trainer Bernie Williams on the lawn of Stage 3 Studios at dusk. Missed that. Meh.

Complimentary raffle ticket for motion picture related goods and services. Gave mine to Alora...couldn't stand in those shoes any longer and you had to be present to win. There were not enough places to sit down, even if you count the bathroom!

Complimentary gift bags containing party favors. So MAD that I didn't get that! I am a swag and gift bag girl and that was what encouraged me to buy a ticket!

Roaming photographers throughout the night capturing the moments. Yeah, a guy walked by me once, held the camera over his head and flashed a photo off without even looking...I know I am not photogenic, but show a little care! Hurt my feelings that I wasn't worth photographing.

So yeah. As a party to see folks I haven't seen in a while, it was fun. But for all the money we threw at it, I guess I was a little disappointed. I just wanted some swag, man. And to feel pretty or something. But I had to stand next to Mary, Jeff and Joe most of the night, so people approached them and not me...
I AM a superhero. Did you know that? I have the awesome power of invisibility!
Posted by Jacquie at 8:15 AM