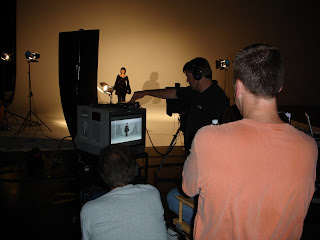 stressed
So, I was at Carrie Ray casting three days in a row this past week!  I hadn't even been there in over a year!  So, that was crazy in itself...
I got cast in a Lafontaine auto dealer commercial.  It shoots sunday.
I also leave on tour to the west side of the state...grand haven/holland/muskegon shows.
I had a callback for a Mich lotto commercial.  Its SAG.  It pays more in one day (even if i was just an extra) than I would make in 3 days on tour...But for some reason, the producers need to see some talent from LA before they make their final decision...for a non speaking MICHGThey are 90% sure they want to use me.  Which would require a fitting on tues and a shoot on wed.  But they won't give me an answer til monday when I will already be on tour.
I suggested to the boss I train someone to take over for me this week, because there is also a waterworks rehearsal I am missing on thurs and a show i will barely make it back for on friday.  Plus Brompton needs to be groomed and Jeff is too swamped to take care of that for me.  Brompton is in such bad shape he is losing whole toenails in our carpet!  I am a horrible mommy.
But BS boss refuses to have "weak shows" with a new person and would rather have "weak shows" with me having a nervous breakdown.
So, instead, I have to drive my gas guzzling jeep out to grand haven (and i have broken turn signals and need an oil change, too) and plan to cut and run on my two partners should this opportunity arrive.
Jen is kind enough to come up from chicago on wed for me, but tues is still going to be a point of contention for me...
I may have to bow out of the waterworks show on friday just because I am sooooo completely stressed about this week.
I should be happy that after all these years, I am not only getting auditions, but getting jobs!  I was even "second choice" for the Toyota audition I went for.  Things are looking up.  Except the BSers albatross is hanging around my neck and destroying my hope for the future.  Better go cry myself to sleep again...I have an early call for an awesome job tomorrow...wish i could enjoy it...
Posted by Jacquie at 5:38 PM