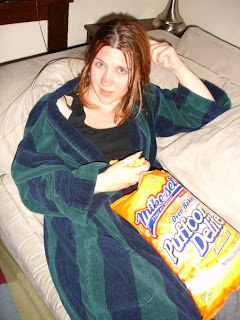 THANK YOU for pointing out that CELEBRITY FIT CLUB is full of crap!

Also, thank you to FRANK THE ENTERTAINER A BASEMENT AFFAIR for having "real looking" ladies on the show...they are all really skinny, but they don't look like they're straight out of a magazine or anything.

HA!  Like that's gonna happen.  When I am home alone, I talk to the Brompton and the tv.  The Tv is the only thing that talks back...It makes a quiet home less spooky.

Yesterday was Valentine's Day and Jeff and I spent it in the best way possible.  Shopping!
We bought a new area rug for the front entryway, new barstools for the basement (still didn't spend enough to get the free Tv and Wii from Gardner White...wah wah).  We even found ourselves intimidating our young salesguy a little.  I didn't mean to, but how many people really ARE intimidated by me anyway?  I just wanted to make sure we didn't get stiffed on the deals posted all over the store.  He thought we were "big time actors".  Ha!  Not yet.

Then we went to Target to get Jeff costume pieces for his break out role in SIDE EFFECTS.  I got a new hat.  I love hats now for some reason...

Then he took me to a fancy schmancy jewelry store that is going out of business.  80% off most everything!  It took some of my favorite pieces down to as low as  $35,000!!!!  Ye Gods!
We almost walked out with a diamond and citrine necklace, but I told him I would rather have a new computer.  So we left with nothing.  It was romantic and fun to dream, but in the end, Jeff and I are way to practical to buy stuff like that.  I would rather wear fake jewels and laugh at the mugger when he runs off with my CZs instead of a 4 karat necklace!  Just saying.

We got our valentine's liquor to make manhattan's and eat our Valentine's Qdoba.  Good stuff, but I've been sick all morning today...perhaps someone has been slipping me Alli pills...cause tasty bad for me food keeps making me sick now!

We watched our Valentine's A TEAM and Sunday night Fox shows...it was just a fun day.

Today I have an audition that could cause a lot of problems for the BSers if I get it, but we would NEED to work it out, because this is SAG, baby! :)
I just want to audition cause I haven't been on a Carrie Ray audition in a loooooong time...maybe over a year!  Gotta get back on the horse, so to speak...

Oh and I dreamed I was a writer for KIDS IN THE HALL and didn't even know it until I saw their dvd box set years later...Someone owes me some Canadian money!
Posted by Jacquie at 9:09 AM