So, I have been getting work here and there.  A lot more than I ever have actually.  But everything I seem to get will never be seen by anyone I know.

Training films, live events for corporate meetings, regional commercials in regions I know no one.

They DO pay well, I admit.  But there is something to hearing someone say, "I saw you on tv the other day."  Or "Let's go see that movie that Jacquie's supposed to be in."

Never heard that.  As far as I know my commercials and billboards never even aired in Chicago.  None of my eyes out there reported back as having seen them.

And so many people I know are getting film auditions.  My agent called me the other day to congratulate me on another gig I booked through them.  A hospital training video.  (Jeff and I were actually both up for the SAME role, believe it or not).  She mentioned how it looked like I was on a role with the auditions lately.  Instead of being gracious, I shot back, "Yeah, now how about getting me on some film auditions?"

I don't think I was mean about it, but come on!  There's gotta be a role SOMEWHERE for a chubby little red head like myself, right?

I am grateful for the work I do get.  I am.  But so many people are getting movies and the only movies I get are made by myself or by friends.  I can't even get into a movie audition!  I wonder what its like to do that kind of stuff?  I have been acting since I was 8 years old.  Look where I am.  I just want one role where my parents can catch it and be proud of me.  Not feel like they wasted their investment into my career.  And I would love for my husband to be proud of me, too.  Not just his fat, lazy wife who eats nachos every wednesday night while she watches America's Next Top Model. 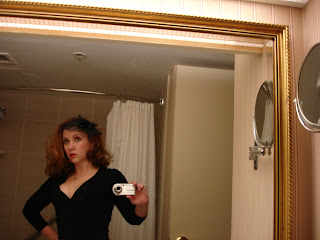 But for now, I will be proud of what I have.  Sometimes prestige isn't everything.  Sometimes just knowing who you are and being proud of yourself is important.  That and doughnuts.
Posted by Jacquie at 2:25 PM