Looking for ego strokes, I googled myself... 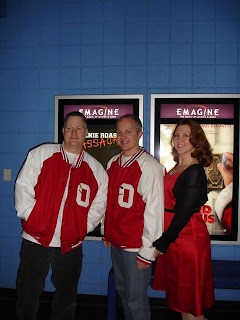 surprised
Does that sound like the start of a dirty joke or what?

Well, I had to remind myself that even when I don't get cast, I still am a talented actress.

I stumbled across a WEENIE ROAST MASSACRE review I had never seen before and is only available in a cached version, so I am going to copy and paste it here

Review by:
Catwalk
Release Date:
2007
Studio:
Singa Home Entertainment
Genre:
Com/Horror
Format:
DVD
Region:
0 NTSC
Aspect Ratio:
1.33:1
Directed by:
John F. Kerr
Cast:
David Prouty
Jeff Priskorn
Jacquie Floyd,
Julie Yurconis
Movie:
2
Extras:
2
Bottom Line:
2
Football. Chicks. Beer.
Weenies.
Marty Flaherty is the stud wide receiver of the Indians; an upstart team of underdogs racing to a championship thanks to Marty’s skills.  When Marty suffers a bizarre head injury involving a barbecue grill, he wakes to wonder if he’s still in the reality he’s been living – or some parallel life.
Marty, his buddy Jason, Jason’s girlfriend Jenni, and Marty’s would-be girlfriend, Rachel head off for a weekend in the woods. Jason (Jeff Priskorn) is the typical hot-headed jock with a temper more volatile than nitrous oxide on the equator on a summer’s day. Jenni (Julie Yurconis) is fickle enough to tempt him at every turn when the couples are joined by a couple other loudmouthed jocks. Jason and Jenni exist for sex, beer and jealousy. Anything deeper is reserved for Marty and the blurring lines between what he knows and what he thinks he knows.
(So…I hear you asking of your monitors….where are the weenies?  Patience, grasshopper. (You can make that out even with a plastic bag on my head, I hope.))
Marty soon discovers the mutilated bodies of the troublesome intruders, but when he reports them to Jason, no bodies are there. Is he going mad? Is he hallucinating? Did someone move the bodies? And what about the next disturbing news…the mutilation of the Indians’ football coach.
(An aside: How many indie flicks feature stoners? And why are they always in pairs?  Food for thought…and munchies.)
The film soon takes a detour into the career of newscaster Stan Wackerman and his ambition to hit the big time. Wackerman and his camera man Ed soon betray the mandates of Felicia, the station director, that “little Hitler bitch”, and decide to move in on the breaking news of Coach Paps death. Stan and Ed proceed to unlock the mysteries of Marty’s past while proceeding on the inevitable crash course with homicide.
While Jason and Jenni figure out their relationship, and Marty finally starts to realize that Rachel actually might love him, a douche bag musician named Nick appears on the scene to disrupt things even more.  (Yes, I realize douche bag musician may be redundant, but humor me here.)
Let’s review.  At this point, we have a high school, relationship and football film with a few homicides…and almost no weenies until an hour into the film. The first time a weenie is on screen, it’s the subject of subjective sucking. As expected, the massacre soon follows.
As the climax looms, weapons and motives are scattered across the scene like suspects and weapons in a game of CLUE. All signs naturally point to Marty, but is the damaged receiver still damaged goods or is he just the herring in the red varsity jacket, leading viewers down a path of hallucination.
What follows is a marriage of “The Best of Time” and “Friday the 13th. “ If viewers are totally confused and distracted, then the filmmakers have done exactly what they’ve set out to accomplish.
So, how does it end? Yeah, like I’d tell you. Watch it and find out.
Weenie Roast Massacre features an average cast hoping to drive home the vision of a good writing team and a twisted director. The cast is adequate for the most part and just not quite up to par in the supporting areas. Jacquie Floyd is a good looking girl and by far the busiest (and most talented) of the cast.
Mark France helms the special effects department, and earns above average scores for the decapitations and rapid amputation set loose in the film’s final act. Before long, almost every character is losing limbs at the behest of the demented killer. France and his team make the most of a cheap situation, leveraging lights and angles to make kill after kill as believable as possible.
Weenie Roast Massacre features slasher film coming-of-age tunes from Pthalo and the Will Eyler Band. Pthalo is an indie band from West Haven, Connecticut. Eyler is a buddy of the filmmakers and a contributor to Loose Change Productions.  In addition to the company’s three films, Loose Change is responsible for Loose Change TV, an award-winning cable access show.
Find the official site of Weenie Roast Massacre at www.weenieroastmassacre.com.
0
Your rating: None

NEW DVD REVIEWS
NEW BLU-RAY REVIEWS
© 2002 - present Horrorview.com., All Rights Reserved | Horrorview™ is a trademark of Crying on the Inside Productions, INC.
All movie titles, pictures, and materials are registered trademarks and/or copyrights of their respective holders.
I don't know what they mean by "busiest" but it was cool to be singled out.

There was also this view you can still link to:

So, its time to get noticed for something new!
Have you ever googled yourself and found a surprise?  Would love to hear about that!
Posted by Jacquie at 4:12 PM