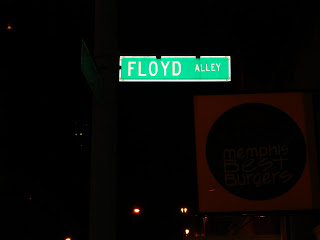 Our first night in Memphis we went to Corky's Famous BBQ. Service was fast and sassy!
We got back to our hotel in time to enjoy our free wine and duckies wandering the lobby.

The next day our shows went fine aside from my stuttering through one of my scenes.

Then we headed to Beale Street and things got crazy! We found a parking garage right off of FLOYD ALLEY! But the sign said they closed at 10pm. I expressed my concern and Sammy went to talk to the lot attendant. He came back telling us not to worry about it. I asked if he was sure and I was teased for being "neurotic".

We went Rendezvous where I had my first slab of ribs ever. They were great. Then we headed to the clubs on Beale Street.

Michelle was in rare form, flashing the empty streets of Memphis, making a cab driver's evening.

Beale Street was closed off to traffic and every bar seemed to have a live band and "beer to go" windows. No one wanted to go to the karaoke club with me.

We found our way to B.B. King's place where their all-star 8 piece band was playing. They were great. Michelle was dancing and macking with random dudes. (Dudes who would later yell at me for cock-blocking them...sigh...Do people REALLY pick up chicks at bars? How cliche!)

Sammy started freaking out, saying some guy who sat beside us was a "musical legend." I asked who he was. Sammy gave me attitude for not knowing. Undeterred, I asked again and he admitted he didn't know either. It turned out to be Eddie Lavert of The O'Jays.

The band was great and Sammy ended up getting friendly with the trombone player. He ditched us to attend their after party. Michelle had a hard time shaking her silver fox. She did cartwheels down Second ave. She kissed hom goodbye at the Peabody and we got to our parking garage which was LOCKED UP TIGHT!

Now I am pissed because everyone called me neurotic but no one would listen to me! Now we are trapped 12 miles from our hotel. We call Sammy and demand to know exactly what the attendant told him. He was no help, of course.

We are trapped outside from our car. Then an angel from Heaven pulled up. She has a card to get into the garage. We ask her for help and she asks if we're honest. We plead that we are and she lets us in.

We run to the car, but everything is still locked up tight. How do we get out?

There's a machine to put cash in. We keep feeding it singles until the gate miraculously opens and releases us. I am still mad, but grateful to be heading back to the hotel.

Greg accidentally blows through 3 red lights before getting on the freeway! But we make it back and Sammy eventually meets us at the airport the next morning.

I didn't pay for any drinks that night, but I am pretty sure I got tipsy. We drank New Orleans' "Most Powerful Drink." The hand grenade.

I got carded at the door of that bar. The doorman said if I looked younger than 25 he had to card me. I told him I might hug him. Instead, Michelle flashed her boobs. That got us all some free New Orleans beads.

We went to another place where I ate some fried alligator. Then we went to a gay bar where Michelle got kicked out but I made friends with a drag queen who let me feel his/her fake styrofoam boobs! The gays LOVE me! :)

Kevin always said I must've been a gay man in a past life because I have a beacon that calls the homos to me. I love them, too. That's why I write so many plays about them!

Then the group had to catch up with some dealers but I had to wait outside because I am a "surprise" in the meeting the next day.

Michelle couldn't be torn away from the bars, so Greg and Peter walked me back to the hotel. I can only take so much fun on a work night.

After our meetings on Thursday, we quick changed our clothes and headed to Bourbon Street. Too bad I had packed two left boots because I had to wear my suit heels with the dress I had packed! I got the right amount of compliments on my outfit. We got giant hand grenades and walked down by the river. By then I was tipsy and needed to get out of my heels before I broke my ankles. Michelle wanted to put on her dress so she could get her attention. I got sloppy, she got pretty and we hit the streets again.

We saw a lot of prostitutes and strip shows. Michelle was the belle of the ball while dudes glared at me as if I were her butch girlfriend cock blocking. So, I played it up, doing Kevin's "Straight man walk". Yeah. I was convincing.

We ate at the Checkered Parrot. Of course, I was too sick to eat, again. Greg and Sammy had a huge political debate.

I asked if they could walk AND shout so we headed to the Cat's Meow. I signed up for karaoke.

A guy asked Michelle to sing LOVE SHACK with him. She made me come up with her. Then I sang HIT ME WITH YOUR BEST SHOT. I was a hideous, sweaty, fat mess. But people cheered for me anyway. It was fun. But, being a hot mess I was ready to go to bed at midnight, knowing full well I needed a shower.

I would love to come back with Jeff. I feel pretty when I am out with him. I was physically just "one of the guys" on this trip. A total dude in everyone's eyes. It felt weird.

I am so glad to be home. I have NEVER felt like an actual dude before and it freaked me out. I even had a nightmare last night that I turned into a guy and I didn't know what to do with myself. Even my mother had to abandon me because she couldn't handle it.

I like feeling dainty and pretty. How does Lady Ga Ga do it?
Posted by Jacquie at 12:07 PM