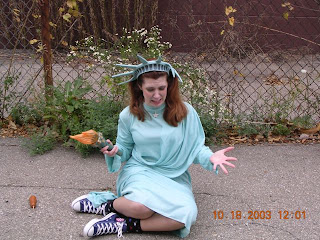 Well, even though I was stressed out looking forward to what my day was to be yesterday, I was excited, because it was finally full of opportunities. It had gotten to the point that I needed to wikipedia the word "audition" it had been so long since I had heard it. Monday, I had THREE auditions plus a rehearsal.

A normal day for Jacquie is walking the dog, writing and playing Bejeweled. So, I was just trying to figure out how I was going to make all four of my appoinments for the day. Then, I started thinking what will I do if I get all the projects I am auditioning for and all the work I would have to do to make the schedule work.

I got to my first audition of the day (one of two voice overs, because people see me walking down the street and say, "Damn! She should be on the radio!"). That audition panned into two more auditions. One of which I had to turn down because it shot on Friday and I am already booked for three Brainstormers shows that day. But I will do the audition on thursday that could put me on the road for the whole month of october.

The second audition was for another radio ad that I really didn't think I fit, but the guy running it was extremely impressed with my speed and articulation for the disclaimer portion. He said very few people do that in this market and its possibly a niche market I could get into. Neat. I am the female Micro Machines/Fed Ex dude.

Then I ran home, walked the dog, ate some rice and ice cream cake and went to BS rehearsal. We booked through that and I hurried to the Rep so I could get in early and read the script before the audition. I got there at 5:30pm. No one was there to let me in until 7pm. My audition was at 7:30pm. Needless to say I didn't get to read the script, despite my efforts. I was only allowed to read for a quadriplegic amnesiac. Once. Needless to say I got the call today that basically said, "Thanks, but no thanks." I am used to that call. Oh. SO. Used to that call. But it still makes me puke a little each time I get it.

Also. I know I didn't get the first audition of the day from yesterday because it is recording right now as I type. With whom, I couldn't tell you, but it isn't me or Jeff.

The second audition, I just didn't fit, so I am pretty sure I didn't get that either. And the voice over for the big puppet movie has apparently already called everyone, too. So, that ship has sailed.

I am nauseated with being forced to stick with the status quo in my life. Despite the scratching and struggling I've been doing. I've been at this damn career since I was 8 and I haven't the strength to quit. Even though all the signs and casting agents are waving at me to do just that. I can't.

But forgive me if I am a little angry with myself for having blown four auditions in one week. I may have to curl into a little ball and be sad for a few days, my friends.
Posted by Jacquie at 9:46 AM