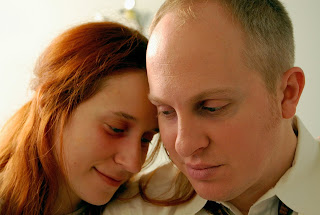 As much as I pretend to dislike the holiday season, I think deep down, I do enjoy it.  I stress too much about giving the perfect presents, I know.  I want every gift to be memorable and genuine gasp inspiring...But truly, what material object can (or SHOULD) do that?

Its all about finally getting quality time with friends and family.  And though certain gestures must (and SHOULD) be made, we should rejoice in the making of them.  We don't have to purchase expensive gifts to make people gasp and remember this particular holiday forever.  We just have to be.  In fact, a "boring" holiday is just as enjoyable because you aren't surrounded by the stresses of work (hopefully) just the love of friends and family.  That's what a holiday is all about.

I've been getting good news here and there lately.  (Not from the bathroom scale, but we aren't on speaking terms until after the new year).

The Guest Room is getting some attention which seems to once again make me feel validated as a writer.
It will be showing at The 15 Minutes of Fame Film Festival in Palm Bay, Florida January 16th.
The Mitten Movie Project February 2nd
and has gotten a "nomination" for a nomination for Best Screenplay as well as Best Actress for Mary Gibbs in the Detroit International Film Festival.

Jeff is actually acting in a #$%ton of movies at the Detroit International Film Festival as well as he just wrapped in a new Unity Studios film project called BLIND SIDED.

I have high hopes to still be thought of as an actor as well, come 2010.  I guess that's why I write under a different name.  I don't want people to confuse my priorities.

Like my first year at OU, I was strong armed into stage managing a show my first week at school.  I had never stage managed before, nor had I taken the class, but apparently they were desperate and I looked like the stage manager type.  After that show closed, I auditioned for the next one and the director didn't cast me and later told me the only reason she didn't cast me was because she thought I was a "tech student just fulfilling my audition requirement" even though she thought I was good.  She didn't want to take a role away from an acting student.  It could have been a line of crap, but I don't ever want anyone to misconstrue my priorities.  I love to write, but I would prefer to act.  It doesn't mean I can't do both, but just as many producers think couples can't work together on set (Hello, Jeff and I can as proved many times over including our Comcast Chicago ads where they didn't even know we were married until we got on set) I don't want people to think I am a writer first.

Although, I do admit I have a LOT of writing to get done in 2010, including a couple of musicals I hope to collaborate on with my husband and sister in law.

There are some roles I am hankering to tackle next year as well and hope will be given the opportunity to do so.  I have practically given up on the theatre as for some reason I can not infiltrate their auditions to get seen.  Monologues suck for me.  Give me a cold reading and watch me shine.  I can never get past the stupid monologue stage.

And being in the union limits me even more.

But I think I would truly be happy making commercials and independent films the rest of my life as long as they keep showing in festivals like this.

Christmas is so close and I feel like I have been celebrating it already.  I am not ecstatically stupidly happy, but I think I am content.  I can add the stupidly happy if I could drop some more weight again.  And I can if I get back on the daily plate wagon, but I won't set myself up for failure before the holidays.

New Years Eve I will be stage managing a murder mystery show at the Lion's Club in Sterling Heights.  I am looking forward to bringing the new blood into the mix.  It could get interesting.  I just pray I am home/with my husband in time to kiss him at midnight.  They say spend new year's eve how you hope to spend the new year.  Just like last year, I will be working and rushing to get to my husband...sounds about right...
Posted by Jacquie at 7:10 PM